A few years ago I was traveling with my mom to Bay of Fundy in Canada. We were on a tour that would show us the highest tide differences in the world that Bay of Fundy has. That area is just stunningly beautiful and we had several stops along the way. One of them was on the beach where you could walk up to the Flower pot rocks. You can only walk underneath them on low tide. And as planned, we got there on low tide so I headed out to see those rocks. The walk up to the rocks wasn’t the easiest ones. The beach was extremely muddy and my feet sunk further than my ankles in the mud with every step I took.

While being somewhat stuck in that mud a little boy ran towards me. He had red hair, freckle  and was slightly sun burned as it was such a sunny day. And he was covered in mud. Especially his face. Just adorable. He was part of a school class taking the same stop on the beach as we were and they were playing along a little water stream. And he was just all smiles and full of joy. I smiled back at him and just felt I was sinking my way towards China in the mud while doing that. But he stuck his hand out towards me and showed me a rock. “Look what I found?”, he said. It was a black rock with a white ring going around in it. And he said, “I want you to have it. So you can make a wish!” The little boy was just too cute and so super friendly. So I thanked him and accepted his rock and put it in one of my pockets. The boy vanished as quickly as he came and joined up with his class mates again. And I remember I thought to myself, the only wish I have right now is to make it out of this mud again. And I didn’t pay that much attention to it again until we got back to the bus. Which I was so glad to have made it. I told our guide about the little boy. And she said, you know the story behind wishing rocks right? “Uh…. nope, I don’t.” So she filled me in. If you find a rock which has a full white quartz ring in it, you may make a wish. You save that rock and when your wish comes true you’re supposed to forward the rock to a friend so they can make a wish like you and save it and the rocks travels around among friends of friends.

The story touched me so much as I thought this little kid was so nice to give me that wish. I was a total stranger to him but he wanted me to have that wish. Or…., he saw me struggling in that mud and knew I needed that wish. Either way, I thought it was too cute. So having told all of the above I’m always on the lookout for rocks with a quartz rings in it. The only thing is I don’t bring the rock back home, I make a photo of it and save that image. Otherwise beaches would become so empty if every one does that. So I changed it into a little picture wish. And over the years I’ve got a small collection of those wishing rocks pics.

And since it’s Christmas, I thought it would be nice to share my latest find here so that you may all have a wish this Christmas. Everybody can use a wish every now and then right?

To fill you in on the story behind this Wishing Rock, I’ve found it in a bit unusual spot to find rocks as it was in a garden bed of the NC Museum of Art in Raleigh. It was raining at the time and it made all the rocks so shiny and pretty. 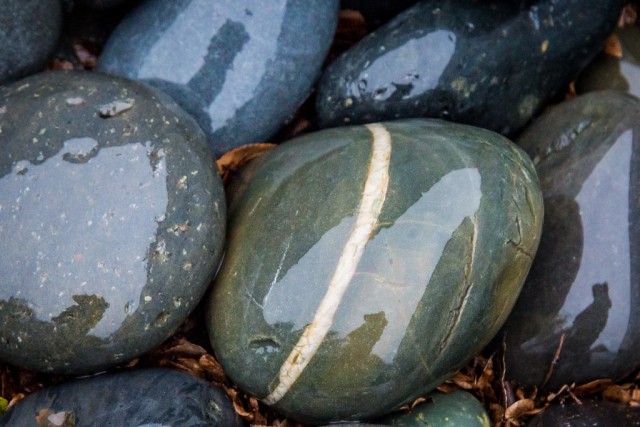 And as I usually do, I tried to get a close up of it but didn’t succeed to make one without me in. So it turned out to become selfie almost. Anyways, it’s the thought that counts and it’s all about keeping the little boy’s spirit alive and I really do hope you’ll make a beautiful wish. They can be of any sort or kind, just remember it and pay it forward when your dream has come true. They world can use some wishes these days right?

Rest me to wish you all a Merry Christmas and may all your wishes come true!