You can’t get too much Winter in Winter. 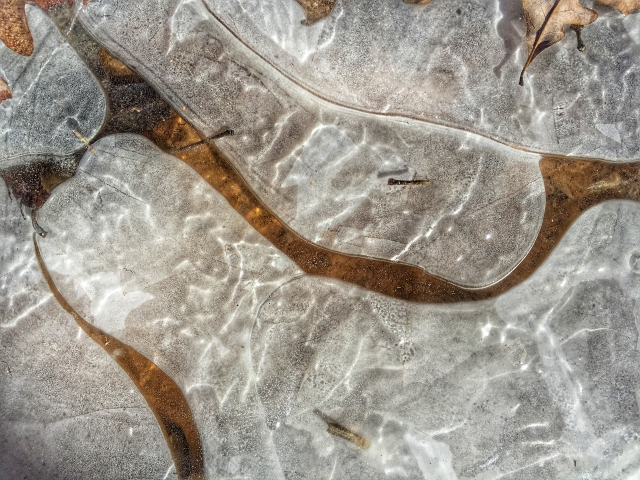 I like that quote, and not only because of the writer’s last name. It’s very fitting I feel as I like the seasons. Especially the differences that it brings along. Just when you get used to certain weather and get somewhat comfortable with it, it changes on you and shows you something that you almost forgot about. North Carolina’s seasons are pretty good at that. It seems we get to enjoy all 4 seasons out here. Some into extreme, but never too long. For mid February there have been freezing temperatures the last few days. While typing this, the rain that was predicted, is still heavy sleet coming down. This last freeze changed the regular outfits of regular things. Like a puddle along the trail I walked yesterday. Lovely icy textures showed up. Wavy and round with a warm muddy color underneath. Very contrasty and I think very pretty.

The leaf that blew into another puddle and froze had that same effect. Warm brown on icy white cold. It touched the water just a little, but enough to freeze into it. Which showed into the darker almost wood like color. Then sun, that shined softly, added an almost golden look into the mix. So had to make a picture of it. To capture it, just for keepsakes.